dboa.ca had the chance to sit down with Daniel Wong-Fung recently as part of our latest “Official Profile” segment.  Daniel is always a pleasure to work with due to his great work ethic on the ice, always having his partner’s backs, great sense of humor, and always bringing snacks for the crew.  Lots of that shines through in the interview below.  He was also honored this year as the first recipient of the Daniel R Spence Memorial Award.  So without further ado …

How long have you been officiating hockey and what made you want to start?

I’ve been an official for about 7 or 8 years. I have been in DBOA for about 4 years, and before that I started when I was 13 in a small town called Newcastle (about an hour east of Toronto). I actually started timekeeping at the age of 11, and Newcastle only had like 6 or 7 refs so I was forced to become an official at 13. I didn’t want to be a referee, but they forced me into it. I think I might have even cried, like it was some sort of punishment or execution. Long story short, I still referee today, so it looks like it wasn’t the worst decision.

Do you have any tips for other officials?

In the dressing room, put your phone down (unless there’s trades on Horizon), and just try to have a conversation with your partners. Talk about food, sports, your cats, or whatever you want. I just find it helps to develop bonds in the dressing room. If you have a bond with someone off the ice, you’ll likely have a much better bond on the ice.

What do you think of the Daniel Spence Memorial Award? Any stories?

I think it’s great we created this award. We should all strive to be more like Daniel, on and off the ice. He was one of the most professional and hardworking guys on the ice, but then after the games, was one of the most laid back and easy to talk to. He was the perfect balance between the two, and one of the guys I always looked forward to being on games with.

When I first started as an official in DBOA, I didn’t have a car and had to bus all the time to games. I once had a game at Brian Kilrea with Daniel Spence, and it was my first game with him. As any officials that take the bus know, that rink is terrible to bus too. Our games finished at 10pm and Daniel offered to give me a ride to the nearest bus stop. It was pretty terrible snow that night. Instead of dropping me off at the bus stop, he drove me all the way home in Westboro. He lived in the South End. He didn’t need to do that, but did. I had just met him that night. He was that type of guy.

What are your favourite stories from working hockey games?

Once I had games from 6pm to 9pm at Canturbury. I didn’t have time to go home between games so I went to the St. Laurent Mall. I got there at 4pm though. So I had a full meal at Manchu Wok, but then because I had more time, I had another full meal at Kentucky Fried Chicken. Spoiler alert, that was a big mistake. Before the game, and inbetween floods, I barfed a lot. Mike Ostrom and Chad Scanlan were with me. We all had quite a chuckle. I also did all the games, and didn’t bail. That was a fun night.

Earlier this year, I was doing the tournament in Kanata at Cavanagh Sensplex. I believe I was with Shawn Corcoran and Ryan Stasiuk. I had the bands and was in the corner of the end zone. A kid took a slap shot that bounced off the post and almost smoked me in the head. I managed to dodge the puck like the Matrix and live to referee another day. I’m unsure where the puck is, so I look at my linesmen, and they’re both barrelled over on the blue line laughing at me for almost dying.

What are your officiating goals for the future?

I’m already living the dream. I’m a professional Midget B house league official.  Perhaps in the future, I’m looking to get my rankings demoted in the B competitive scene. One can dream. 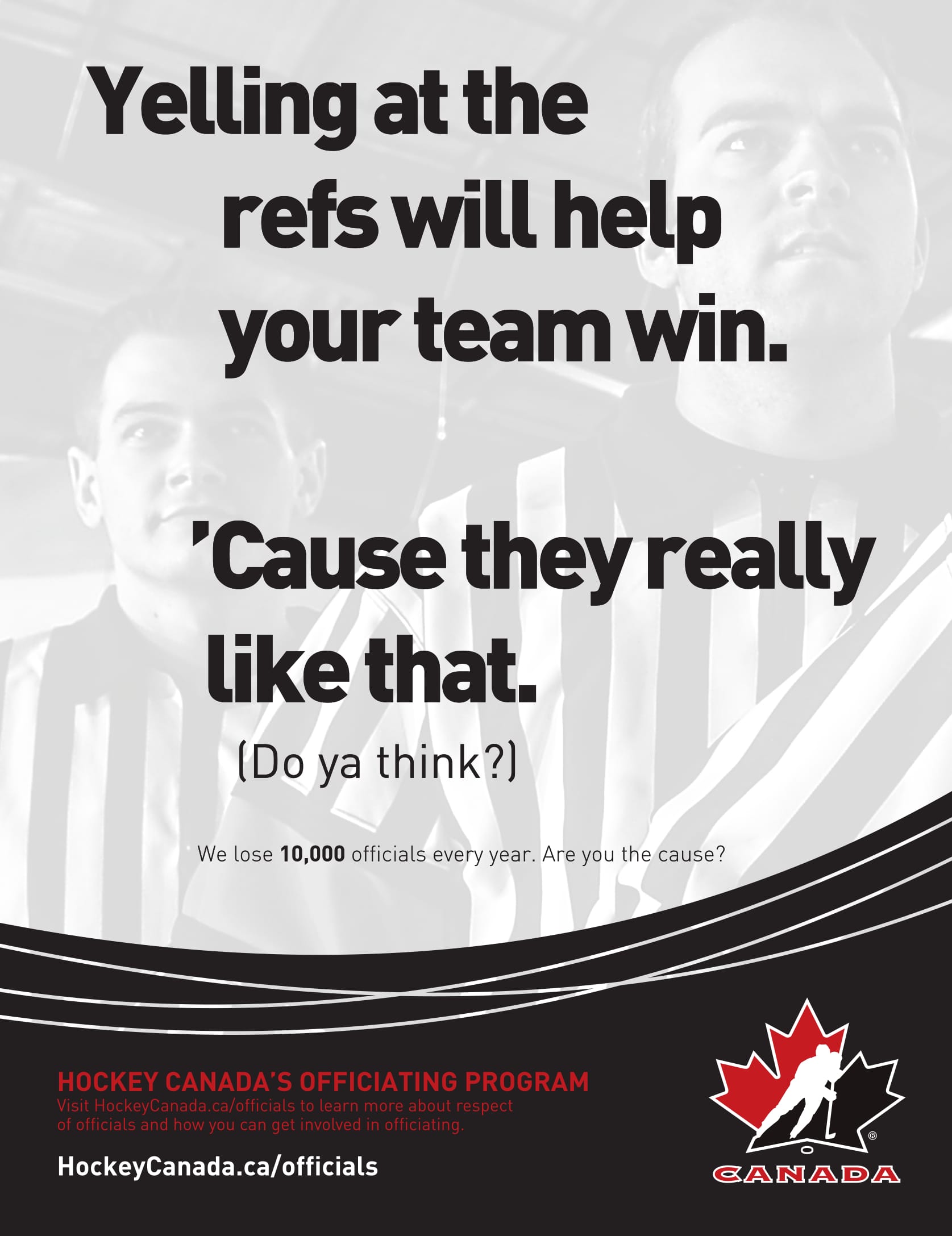